Welcome to the With Shield & Ink & Bone page. Learn more about the book, watch the trailer, see the character art, and read an excerpt.

Days before she is to take her place as a shield maiden, like her mother before her, two deaths alter the course of Liv’s future. One belonged to a witch who called her by name, the other a chieftain from the north. Vengeance for the chieftain’s death comes in a wild fury that burns her village and slaughters her family. Left for dead, Liv pleads to Skuld – norn and weaver of the future – to spare her. A deal is struck that will endow her with the dark magic needed to claim her vengeance. But this power comes at an unfathomable price…

Ink made from the ashes of loved ones.

After his home is attacked, Calder races to warn neighboring villages of the threat. Little does he know he’s traveling into the path of fate that will lead him straight to Liv. Despite being broken, angry, and overwhelmed by power she cannot contain, it’s her willingness to defend others that draws Calder to her.

Armor forged from the bones of those she held dear.

Together, Liv and Calder discover they are two sides of the same sharpened blade. Rising from the heartache and fury in their pasts, they see a future together worth fighting for. With their strengths and hearts combined, can they become a force powerful enough to defeat the fleet of darkness coming for them? Or will the thread of fate that binds them unravel?

“With Shield and Ink and Bone is a fast-paced, vivid, and mesmerizing tale that will keep you hooked from beginning to end. If you love Vikings or strong heroines you’ll find lots to enjoy here! Casey L. Bond has woven together unexpected twists, high stakes, romance, and bargains with gods to create this original story for readers.” -Victoria McCombs, author of The Storyteller’s Daughter 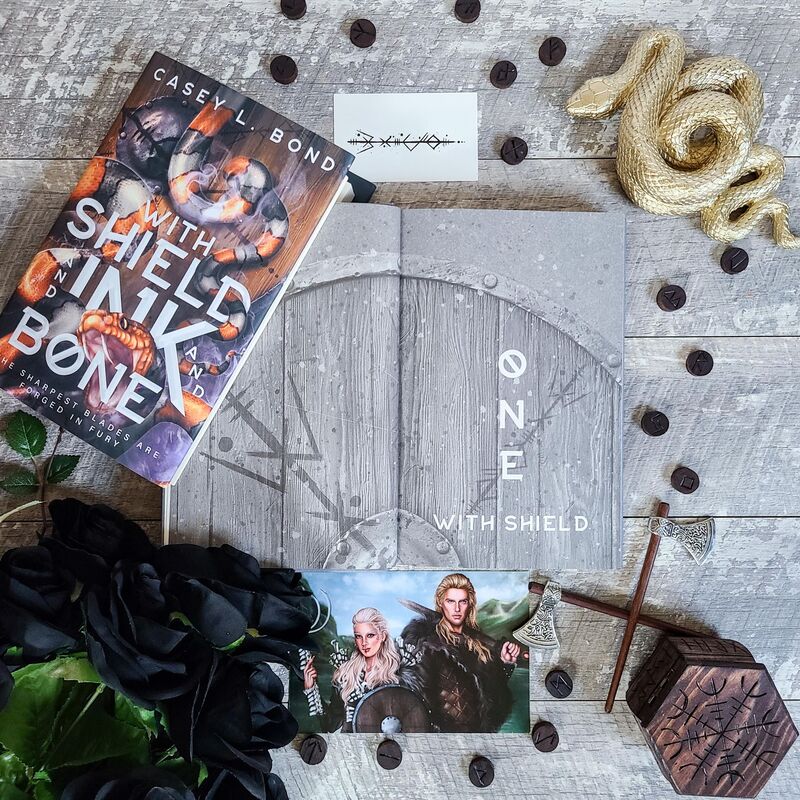 Sneak peek of the character art by @Adamar_art & the interior formatting of the hardback. Photo by @Fearyourex.
Enjoy a brief excerpt from With Shield and Ink and Bone.

“Words hold power,” she finally said, taking up a long, wooden staff and walking toward me, closing the distance between us. I realized it was her wand, not a staff. The tip looked woven, like strands in a basket, but even as they bowed from the staff itself, they rejoined to make a fine tip. They said witches could use their wands to spin the fates of lesser men.

I wasn’t lesser. My eyes narrowed at her closeness.

“Few realize that,” she continued, undeterred. “They waste what little power they have by wagging their tongues too much.” She smiled as she approached, stopping only when the bottom of her crimson skirts brushed the tops of my boots. “But not you. You observe first and speak only when it’s necessary. Even when your mother doesn’t warn you beforehand.”

I swallowed thickly as she lifted a hand and let her thumb ghost down the lumps and bumps of my braid, pausing over the iron serpent coiled around it. She took in my shield. “I need you to come with me now, Liv.” She turned her back to me and began walking away from the shore.

“How do you know my name?” I asked, refusing to follow her retreating form as she walked toward the wood.

She turned with a knowing smile on her lips. “Because someone very important has a message for you.”

She continued her trek, using her wand to help her up the slope, weaving herself into the oaks and pines as if she was a scarlet thread in the forest’s vast tapestry.

My feet followed her.

The coppery scent of blood filled the air and we entered the spot where the animals had been slain. They hung from thick branches in the trees above us, their blood leaking into pots and jugs, buckets and bowls. “We must sit amongst them,” she said, laying down her wand. She gathered her fine gown and sat on the forest floor. “On Winternights especially, there is more power in the dead than in the living.”

Hodor had stood there earlier. He split his rope to hang each of the animals we brought to later smoke and preserve.

I recognized each of them. The scrawny lamb that was born too late in the year and wouldn’t survive the cold, the goat with the lame hoof, the runty piglet who was born months ago, but wouldn’t grow despite the amount of food she ate.

Now they were dead, hanging limply from branches, and the witch wanted me to sit with her beneath them, surrounded by captured puddles of their blood.
Silently, she stared at me and waited for me to comply with her request. I slowly walked forward, the wind stirring the strands of hair escaping my braids as I stepped beneath the animals. The moment my backside touched the forest floor, a strange energy washed through the air.

The dead animals hanging above us began to writhe. The lamb let out a pitiful bleat and the pig weakly grunted. The cocks flapped their wings and flew in circles. Blood droplets landed on us. I ducked and shielded my head with my arms, looking to the witch as goosebumps erupted over my skin.
She sat calmly, completely unaffected. Her cool, brown eyes were fixed on me.

The animals went still again as a gust of wind tore their spirits away once more. My heart fluttered as I watched them rock back and forth, the ropes that held their weight creaking on the rough limbs until they finally went still.

Splat.
Splat. Splat.
More droplets of blood splashed into the containers beneath them, wrung out by spirit and wind.

A slow smile spread over the völva’s berry-stained lips. “There is power in blood and bone,” the witch offered.

Power in words.
Power in blood and bone.
Power in the slain.

For me, Winternights had always been a raucous mixture of celebration and spine-tingling fear. The dead walked the earth and joined us as we bade farewell to summer and greeted the frigid winter, bade farewell to the earth’s life and let death claim it again, as it had claimed our kinsmen. We were nearer to them on this night, for they dwelt in the coldness of death now after their walks in the sun, among the living.

“I told you. Someone has a message for you.”

She untied a small pouch from the belt at her waist and withdrew a wad of leaves, placing them in her mouth and chewing them. She rolled her neck. Her silken hair fell over her shoulders as she rocked forward and back, forward and back. Her movements, once smooth, became jerky and erratic. Her breathing became labored. She wrung her hands. Her legs fidgeted.

A burning smell filled the air. Not one of oak chips or firewood, but one that smelled of sizzling flesh.

I scooted away from her.

Her hand clamped onto my ankle. “No!” she snapped. “Do not retreat. She is near.”

I looked over my shoulders, all around the shadowy wood. If someone was close, I couldn’t sense her. No branches snapped. No leaves rustled.

She removed another small bundle of herbs from her pouch and offered it to me. “Chew.”

I shook my head when she insistently pushed it toward me. I didn’t take it from her. “It is the gateway to the weavers… to the norns.”

Blood whooshed through my head, through my ears. “The norns?” I asked breathlessly. The weavers called for me? By name?

“Skuld wishes to speak with you. This is the only way.”

The witch dipped her fingernails into a pot of lamb’s blood and flicked it toward my face. Small droplets sprayed my skin.

She shoved the wad of blood-soaked leaves into my hand. My clammy palm wrapped around them, then unfurled. It wasn’t wise to eat certain plants. Some would cause visions, but some… some killed. And völva often sacrificed humans to the norns and to the gods.

They would drug them, and when they did not know their head from their feet, the witches would tear the heart from their chest and hold it, still beating, in their hands, calling out to the gods to show what they’d done for them.

“But, Skuld—” The witch’s voice cut off. Her breath hitched, then a squeak escaped her throat. My mother stood behind her, the tip of her knife biting into the woman’s skin, her knee in the witch’s back.

The runes began to writhe on her forehead, cheeks, and throat as she called upon her magic, but my mother didn’t care. She held her blade tightly and refused to relent.

What is she doing? The witch will kill us both! Or Skuld may decide to clip the threads of our lives for refusing her... I leapt to my feet.

“I believe she declined your request,” Mother gritted.

The völva’s dark eyes locked on mine. “You are making a mistake. You’ve seen the first sign of what is to come.”
​
Copyright Casey L. Bond 2020