The Omen of Stones 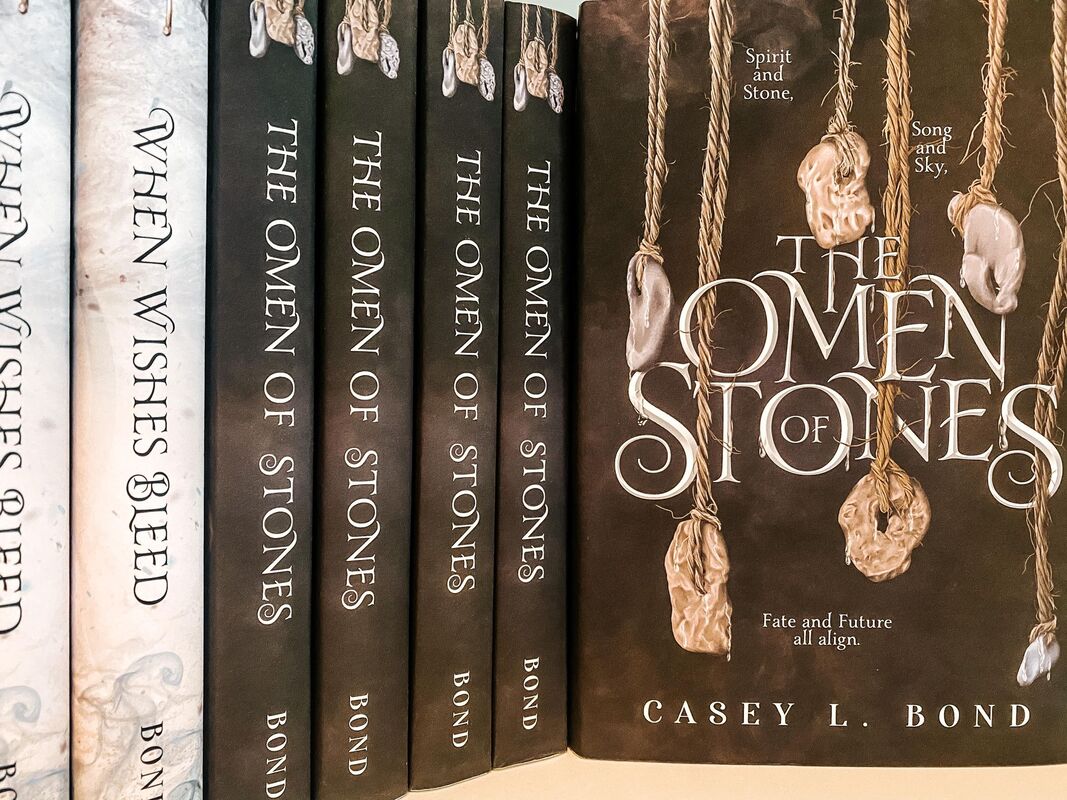 Welcome to the page for The Omen of Stones. Learn more about the book, watch the trailer, and read an excerpt below. ​
Spirit and Stone, Song and Sky, Fate and Future all align.

On my seventeenth birthday, I finally heard Fate’s voice. He whispered to me again and again, insisting I find the Omen of Stones. Having never heard of such lore, I thought I could ignore his pleas. The Summer Solstice proved otherwise. Being surrounded by fellow witches worked my magic up into a powerful swell that crashed and churned within me. As the energy crackled through my veins, I shunned my royal duties to follow the call of my heart.
Venturing beyond the safety of the Kingdom’s borders, I felt Fate nudging me toward a destiny I was eager to claim. Confidence in my craft blinded me from the ominous clouds of danger that roiled on the horizon.

Captured by purists dead-set on purging the Kingdom of magic and witches, my salvation came in the form of a mysterious girl who wielded stones like daggers. Something about her called to me, whispering we were stronger together, strong enough to stand against the dark forces threatening to crush my kingdom. Trusting Fate could jeopardize my heritage and my throne, but defying him could cost Omen’s life.

The room was packed with witches and humans alike, all dressed in their finery, an array of vibrant colors and rich blacks. The gift from my parents sat heavily on my head, a thick silver crown I didn’t want but couldn’t refuse.

That was yet another conversation we needed to have soon, but not tonight. Mom and Dad wanted to have a night of fun and peace without worrying about the Purists or their incessant attempts to drag our family through the mud. For once, so did I. Fun and peace sounded like sweet relief.

Almost everyone caroused on the dance floor as musicians played upbeat songs. Mira even pulled me onto the dance floor once. I thought she just wanted to have fun, but her ploy became apparent when Brecan sent the confetti and glitter into the air, coating everyone dancing. The guests loved it. Laughter filled the hall, echoing across the ceiling.

Though the room was filled with people, I only knew a handful in attendance. Brecan brought his witches from the House of Air, all arrayed in pale blue and white robes. Their tastefully muted tones set them apart from the Fire witches led by Ethne, who were bedecked in sumptuous tones of pomegranate red, sunset orange, and turmeric yellow. Mira’s Water witches were garbed in a mixture of dark blue shades that ranged from the glossiest sapphire to the blackest of navy, while the witches of the House of Earth sported green hues from playful tones of lime and chartreuse to the deepest forest green.

Then there was Arron and his House, the House of Fate. The House where in another life, I would have been assigned to live to learn my magic in safety. If I hadn’t been born a prince, I would be standing with Arron enshrouded in black. As it was, no Fate witch had been born in the Kingdom since me, so Arron stood alone.

Arron’s eyes bothered most people, but they never bothered me. The pupils were slitted, like a cat’s eye. He was called the Son of Night, in part because dark clouds concealed him and reality bent to his whim. He could make the entire room appear as if it was an impressionist painting. He could make everything blurry or make people forget he was in the room. I suspected he could do much more than he’d revealed, and much more than Mom would let him show me.

He walked toward me but stopped when he saw Mira approaching. I wasn’t sure what was going on between them. They obviously loved each other, but Mira’s duties as Priestess of her House kept them apart. At one time I remembered them being happy and as affectionate as propriety allowed, but now…now a chasm had formed between them. When I asked Mom about it, she simply said that Arron felt he loved Mira more than she would ever love him, and that he might have to move on. And that Mira was heartbroken, but wouldn’t admit it to herself.

Mira followed my eyes to Arron and gave him a forced smile before threading her hand through my arm. “I made a new suit for your birthday, but you have to promise not to wear it until I say,” she announced coyly, waiting until I agreed to her terms.

“Then it’ll be a very long time before I wear it,” I teased before thanking her. Tugging at my collar, I tried to ease the tightness in my throat.


And here's another snippet because I love this book...
I looked around at our house, then to the boy standing in it, into his honey-gold eyes. “I don’t regret saving you, and I don’t regret bringing you here, or making salve for you, or letting you stay. I don’t regret walking with you to see the flood. But if I had let those men drown you, or if I would’ve left you bound in the rope when I had the means to sever it, or outside without a roof over your head when I had one to offer… If I’d refused to ease the pain in your wrists, River, I would have regretted it. I would have regretted every second of any and all of those choices.”
The Omen of Stones Official Book Trailer made by @TheIllustratedAuthor.
​